Rwanda Air fly 3 times a week from London to Kigali and as you fly into this small city you realise why they call it the ‘Land of a Thousand Hills’. Unlike a number of other African capitals, you quickly notice there is almost no rubbish anywhere which is partly as a result of a strict ban on any plastic bag since 2008, but also ‘Umuganda’, where everyone takes part clearing up the streets on the last Saturday of every month. In fact, Rwanda is a very forward thinking country producing all of its own electricity from Hydro and solar panels, is incredibly safe with a very low crime rate and an extremely well-funded and well thought out conservation plan. In 1984 there were only about 250 Mountain Gorillas left, yet today there are over 850.

Of course everyone’s first thoughts of Rwanda are its gorilla trekking, which was naturally the highlight of my trip, but it was also the other areas of Rwanda that I was keen to explore.

After a day spent in Kigali at a boutique hotel called The Retreat, a great spot if you want to avoid the larger international hotels, I visited the Genocide Memorial. Whilst many will not see it as bucket list excursion, I would recommend everyone who visits Rwanda to pass by here. Rwanda’s recent history is tragic and it pays dividends to learn about how the past has shaped Rwanda’s present and future.

This 100,000 Hectare Park is located on the eastern edge of Rwanda and borders Tanzania. In 2010 African Parks took it over in partnership with Rwanda Development Board and have been doing a great job ever since. The Park can offer a Big 5 safari experience amongst some beautiful and varied landscapes. With habitats varying from open grassland savannahs, marsh lands, lakes and mountains, it is not only mammal life that is thriving here, but bird life as well. 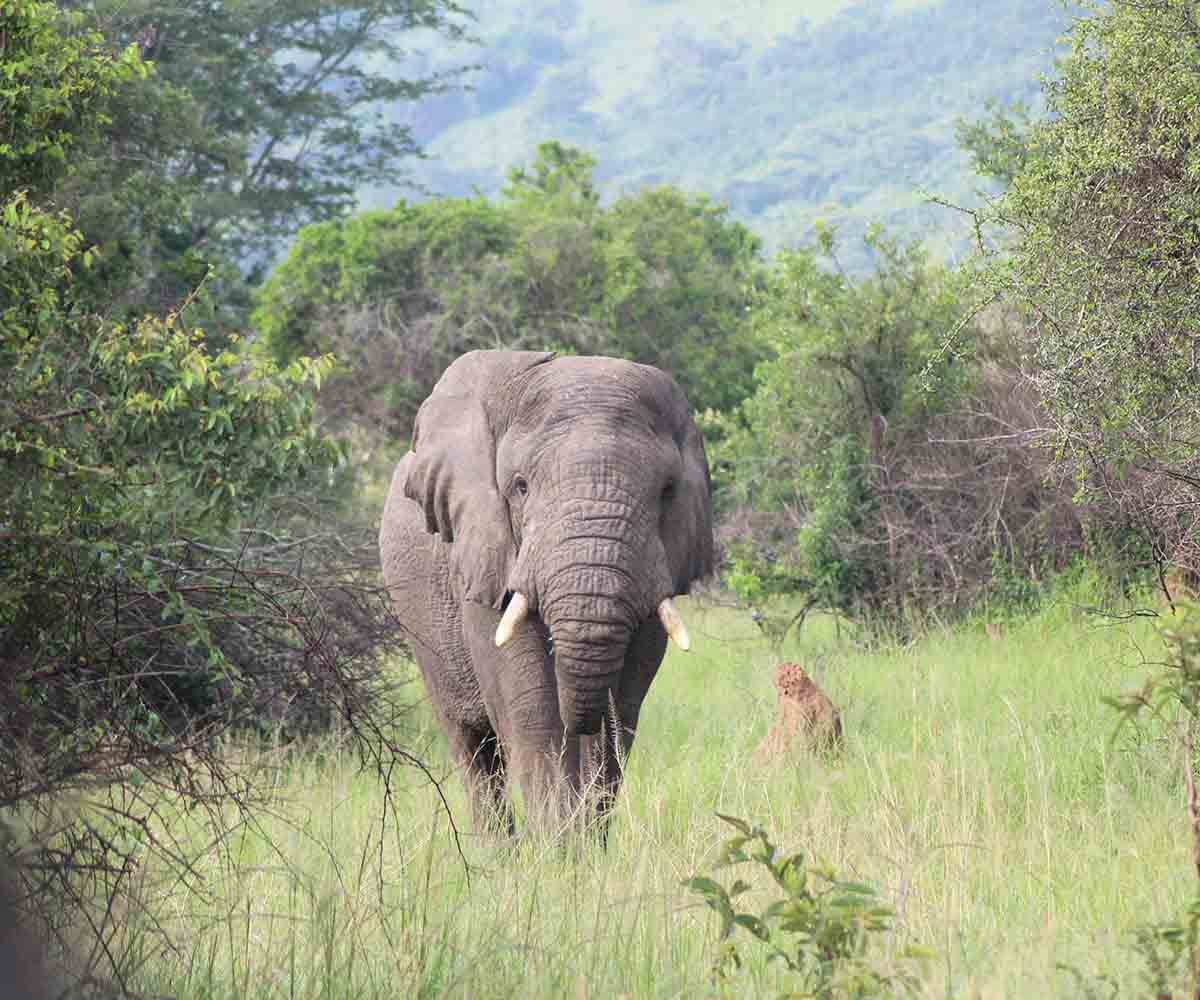 I stayed at Magashi, a luxury tented camp owned by Wilderness Safaris who are heavily investing in Rwandan Eco Tourism. Their goal is to build a safari circuit combining Akagera, Volcanoes National park and soon a Chimp experience in Gishwati. The camp is small and intimate comprising of six tents and a main area, all of which boast views onto the lake. Access is very easy, located only a three-hour drive from Kigali or a twenty-five minute helicopter flight, you could be on safari the same day you land in the country!

Magashi is set in a private concession in the North of the park which includes the huge lake Rwanyakazinga which is full of hippo, crocs and an abundance of birdlife (around 500 species have been recorded). If you are very lucky you may see shoebill and sitatunga. It is important to note this is an incredible conservation story in progress with lion reintroduced back in 2015 and black rhino in 2017. On one morning drive I saw elephant, black and white rhino, lion, giraffe, spotted hyena, zebra, topi, buffalo, eland and more….

I was more than impressed and with just 2 nights I had a great safari experience with a mix of boating on the vast lake and as well as day and game drives. In time, Wilderness are looking to introduce walking safaris but due to the dense bush the walks would probably be take place on the ridgelines of the escarpments that tower above the park.

Muzanze is the gateway to Volcanoes National Park. It is a three hour drive from Kigali and between four-to-five hour drive from Akagera. By helicopter, it’s around half an hour and the lodges have their own helipads. Whilst using a Helicopter is the quickest way to get around I would always recommend at least one drive to see countryside which is beautiful.

I spent my time staying at Sabyinyo Silverback Lodge and Bisate whilst also making a visit to Singita’s Kwitonda and One and Only’s Gorilla Nest. All of these properties have very different styles, so depending on your requirements would certainly tailor my recommendations.

Gorillas Nest is a very luxurious resort maintaining the highest standard as seen in their other properties around the world, but it does very much feel like a resort and not a lodge.

Sabyinyo has a very traditional and cosy feel. It feels like it is part of the landscape and sits on the hill side surrounded by lush vegetation. It strives to farm as much as its own produce as possible and out of the lodges we would recommend, Sabyinyo offers the best value for money. Kwitonda sits on the border of the National Park with beautiful views that are topped with a back drop of the famous volcanoes. Singita is arguably one of the most luxurious safari outfitters in Africa and Kwitonda joins their other properties at being some of the best properties in Africa. Their private Kataza House is incredible. Whilst Singita’s footprint is quite obvious on the flat plains outside the park, Bisate (about twenty minutes away) is nestled into the hill side, almost completely hidden by the reforested plantation. The lodge’s exterior is designed in the style of traditional Rwandan huts that used to house royalty. The interior of the lodge is an incredibly well thought out luxury experience with views onto two extinct volcanoes.

All of the properties mentioned are around half an hour to the park’s headquarters which is where you meet at around seven am for your gorilla or golden monkey treks. I didn’t have time to visit but there is one other lodge we often use. Virunga, its located about 1 hour from the park HQ but has amazing views over the lakes and amongst the volcanoes.

I was lucky enough to undergo two gorilla treks to and each hike offered a different experience. 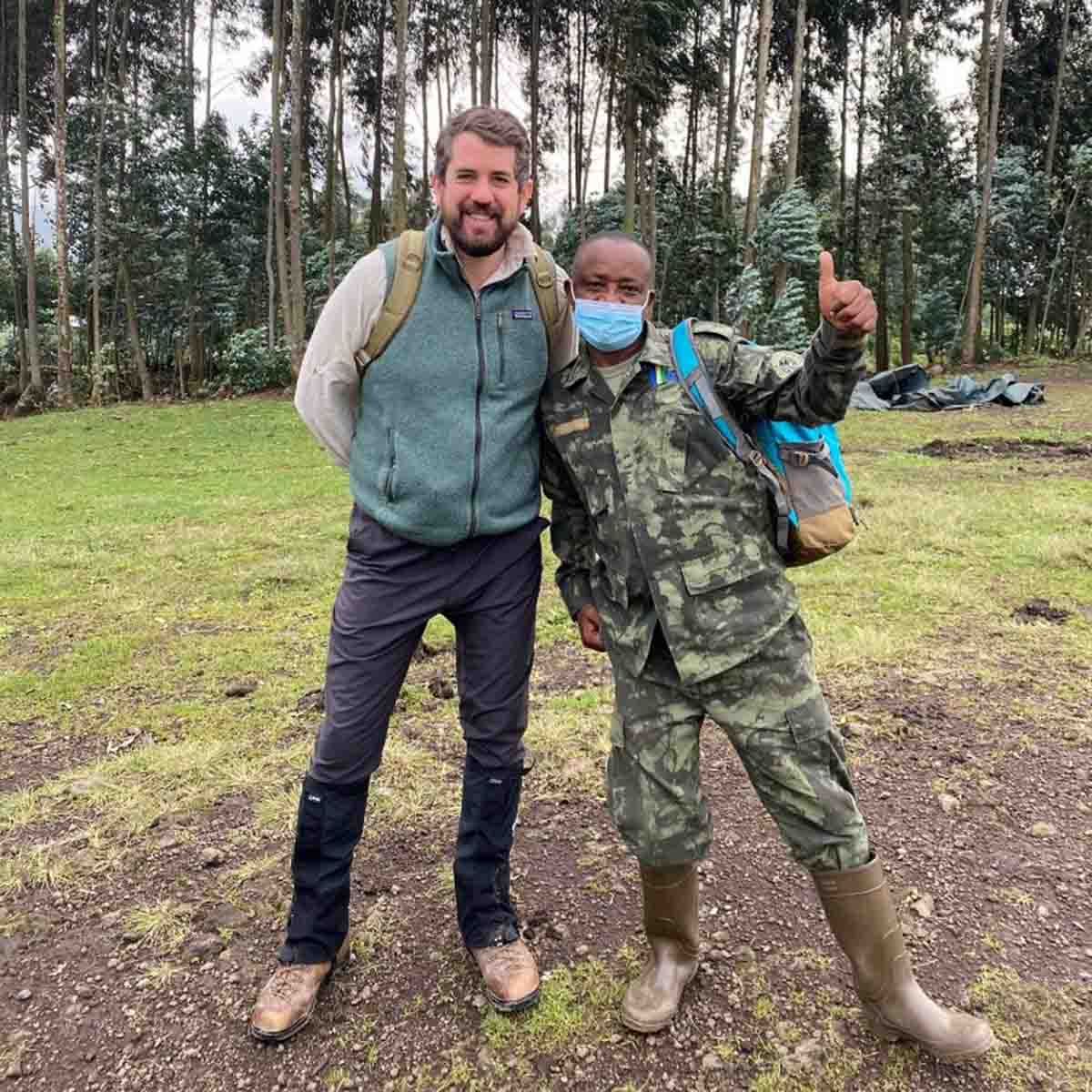 With my guide in Volcanoes National Park, ready to start trekking!

The first, I was allocated the Sabyinyo family and we drove towards Bisate Lodge where we were met by our porters who joined us. The porters are there to assist you on the trek, from carrying your bags to helping you through the steeper areas. Even if you are feeling fit and strong it’s recommended to take at least one porter with you as this is how many of the local people are employed.

Since it was the low season, tourist numbers aren’t at their peak so I was lucky enough to be the only person trekking this particular family. We walked across farmland towards and as we approached the park boundary we could already hear the gorillas snapping bamboo, I was amazed how close they were having only walked twenty minutes.

We met the team of trackers who follow the family twenty-four hours a day, and with my guide and ranger we sat with the family for an hour in an opening surrounded by the lush bamboo. The family was comprised of a real mix of ages and I will never forget the moment that ‘Big Ben’, the dominant silver back, looked me in the eye as he walked past. Brushing shoulders with the alpha of the group was an experience I certainly won’t forget! 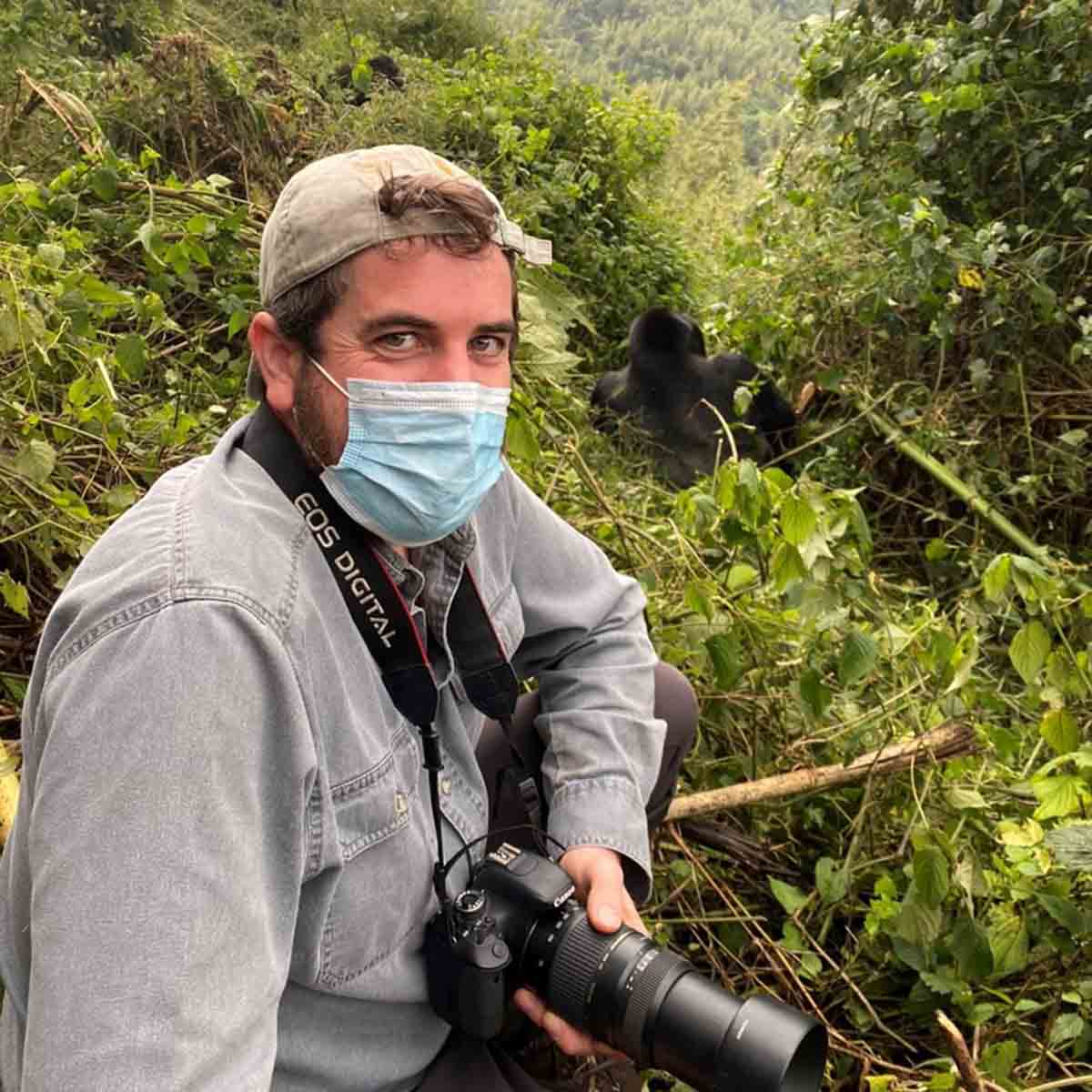 Unforgettable moments with the gorillas.

The second trek was very different, we were allocated the Agashya group which was regarded as an ‘easy’ trek family as they were last spotted quite close by, however as we trekked it became clear they had moved on and we ended up walking two and a half hours through thick bamboo and muddy tracks. This time we were a group of eight travellers with eight porters who really were a huge asset, they were literally pulling us up the muddy hillside. Once we reached the family it was worth every slippery step we had made, the family had two young gorillas who were very playful, and again we had a magical experience sitting on the forest floor with our close cousins. The walk back was another two hours and we were lucky enough to hear a golden monkey in the nearby thick foliage.

Having two treks was a real treat and I would really recommend it. The first trek I was almost in shock, snapping away with my camera, trying to get the best image and the hour flew by. The second trek, I was much more calm and I really enjoyed not looking through the camera, but just sitting and enjoying watching some of our closest relatives go about their daily lives in the most magical of settings.

I ran out of time to get down to Nyungwe Forest, however this is an area in the south of the country where you can trek to see habituated chimpanzees. This huge forest is a beautiful area surrounded by tea plantations. Chimp trekking is similar to gorilla trekking in which there is a strict limit on the group size (eight people) and you can only spend an hour with the family once found. The time with chimps tends to be a more energetic hour. Being more active than the gorillas, the chimps swing from tree to tree and run around forest floor. It’s a completely different, but unforgettable experience.

The best place to stay here is the One & Only Nyungwe House. It is an incredible property but it is also incredibly expensive. If you are staying here you may as well pay the extra and do the thirty minute helicopter ride to get this far South, otherwise it is good seven hour drive from Kigali. In a year or two we are hoping Wilderness Safaris will be opening their camp in Gishwati Forest which will offer a chimp experience just two hours from the gorillas at Volcanoes National Park. The camp is already there and they are busy habituating a number of troops of chimp with the researchers.

Overall, Rwanda is an astonishing destination and if you’re heading there just for the gorillas, it is worth clearing some more time in your diary and making room for the chimps of Nyungwe and Akagera National Park.

Botswana Trip Highlights | An insight to the Okavango Delta

Botswana Trip Highlights | An insight to the Okavango Delta