Blog Home
All Categories
Posted In Where to see

There is no hiding the fact that the ‘Big 5’ are the draw of most safaris. The chances of coming face to face with some of Africa’s hairiest and scariest animals are what draws millions of people to the continent each year. Coined from an old hunting term, the ‘Big 5’ where listed as the hardest animals to hunt on foot. Not chosen for their size or the number of people killed per year, these five animals do not include the likes of the crocodile or the hippo, instead the list is made up of the elephant, buffalo, lion, leopard and the rhino. The notorious elephants of Africa

Unfortunately, people do start to measure their safari’s success on how many of these wonderful animals they have ‘ticked-off’, yet there is so much more to a safari then just the large mammals. From the jaw-dropping sunsets, the rolling plains dotted with thousands of herbivores in East Africa, or the rugged landscapes of Southern Africa, a safari is the embodiment of being at one with nature. Whether you are gliding in a mokoro on a meandering waterway in the Okavango Delta or walking along the edge of the mighty Zambezi in Mana Pools, there is an abundance of flora and fauna to marvel at.

For those who enjoy searching for a specific group or type of animal, then the following post will certainly be of interest. Apart from the ‘Big 5’ there are other groups of five that are definitely worth looking out for on safari…

Based around the ‘Big 5’, the little five are the smaller versions of their bigger counterparts and can be found in almost every safari destination. The most frequently seen is the leopard tortoise. This gorgeous reptile gets its name from the markings on its shell which resemble the rosettes found on a leopard. 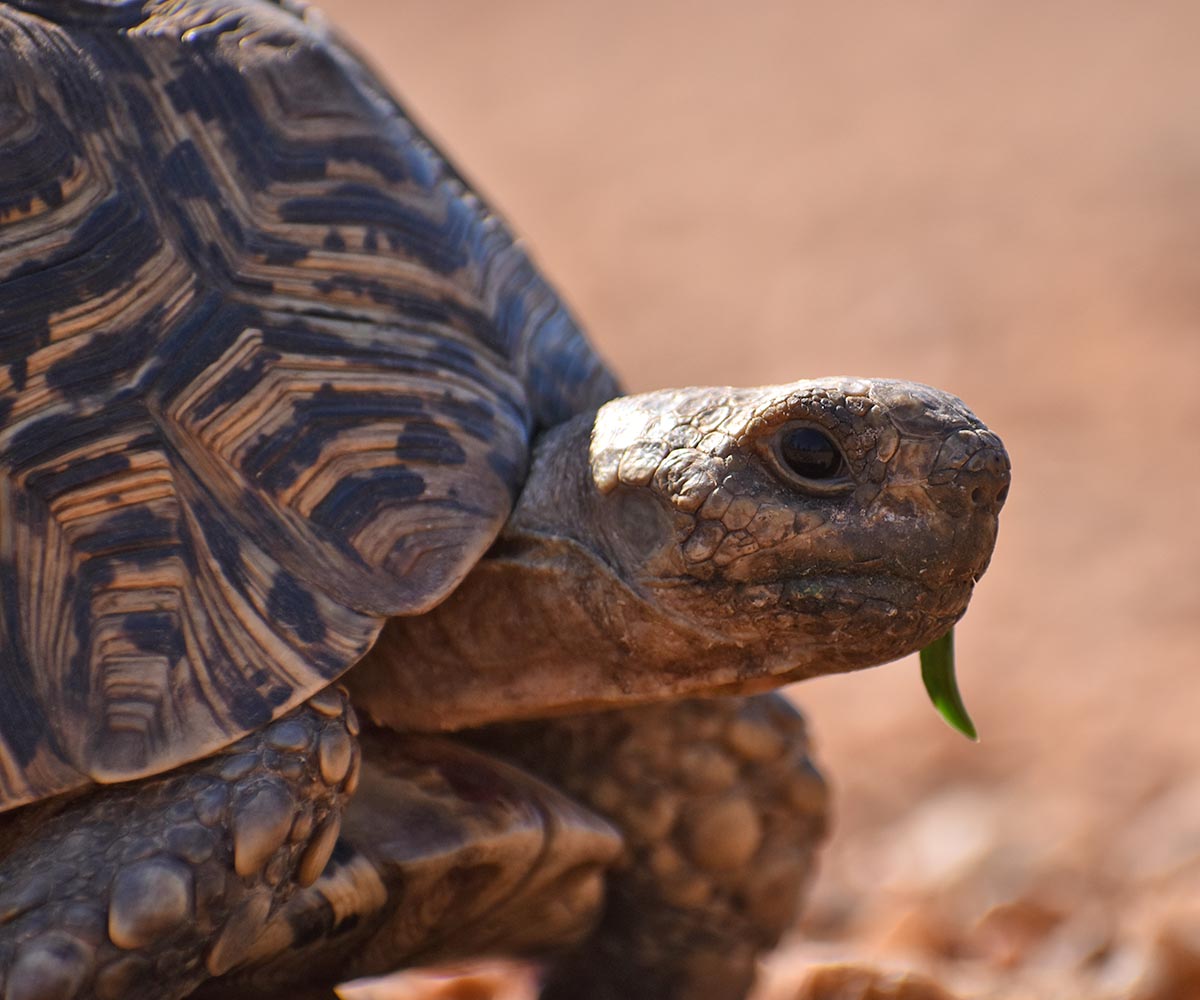 When on your next safari coffee break, look at the sandy floor. It is almost guaranteed to be marked full of lots of holes which are formed from the larvae of an ant lion. Whilst the holes are seen almost everywhere, catching a glimpse of the fully formed insect is certainly not a common occurrence. Transforming from a small larva into a beautiful dragon-fly like type creature is the ant lion. Its name derives from the way in which the larvae catch their prey. Whilst the sandy holes you will see on the floor look inconspicuous to us, to an ant they are a death trap. Once they fall in, the ants cannot climb out which is when the larvae attack and consume their prey.

Mistaken for a rodent due to its size and its nocturnal habits, the Elephant Shrew is a small and scuttling creature who gets its name due to its elongated nose that resembles a small elephant trunk.

Found in roughly made and very large nests are the communal nesters, the red-billed buffalo weaver. This bird makes a call that almost sounds electronic and if a raptor happens to come near to the nest, a mob of the birds will descend to protect their young and home. The small birds make for great entertainment and since they live in such big groups, you can be sure that drama is never too far away.

Normally seen by mere chance than anything else, the rhino beetle is perhaps the toughest looking member of the little five. With amour plated sides and a beautifully curved horn that aptly gives it its name, this beetle is also beautiful specimen to photograph. 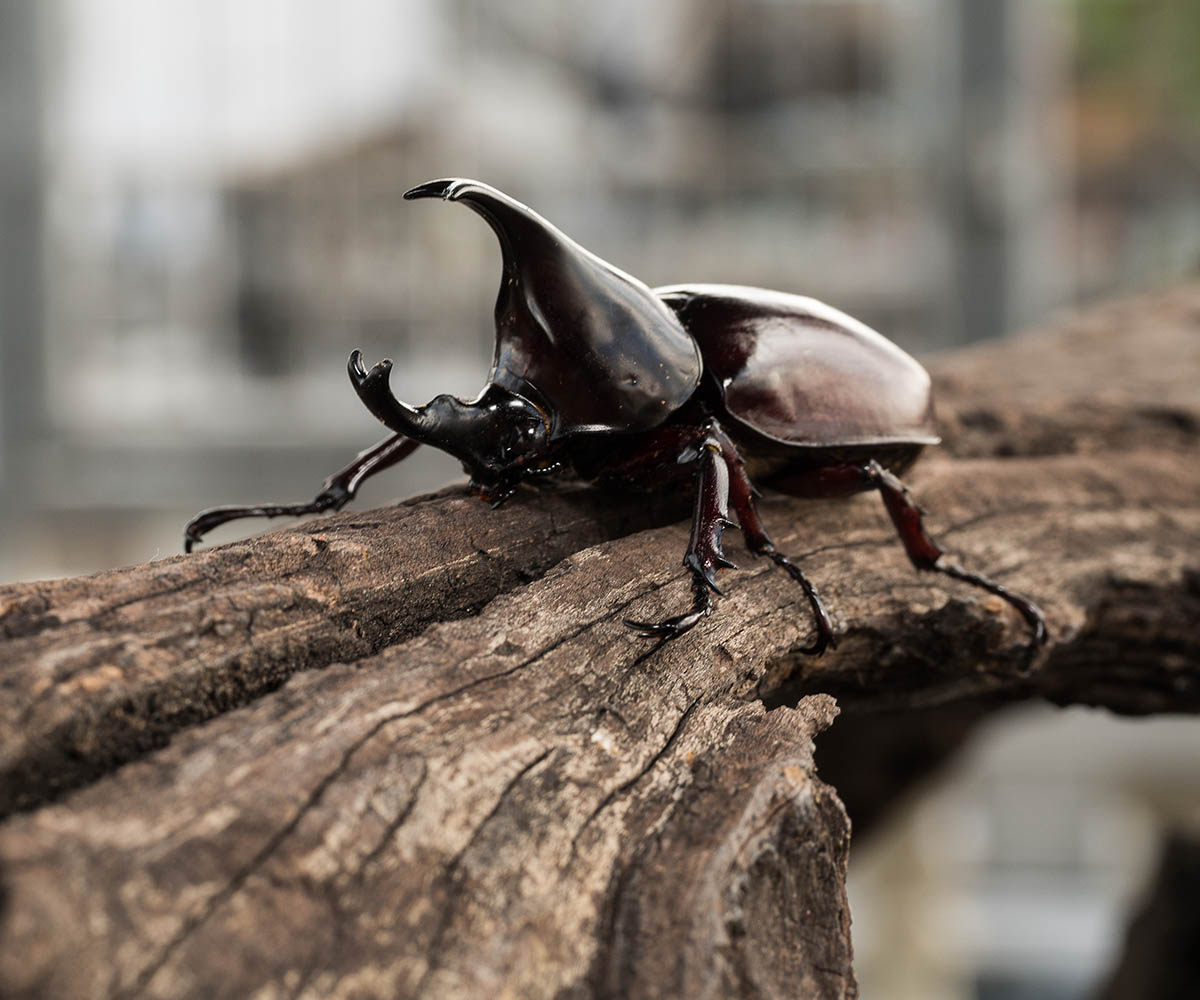 If you come across a carcass whilst you are on safari, the likelihood of spotting at least three members of this list is very likely. The members of the clean-up crew are the vulture (of which there are a number of different species), the spotted hyena and the marabou stork. Whilst the loping figures of the hyena have been given a very bad name mainly due to their part played in the Disney’s Lion King, they play a valuable role in the cleaning up of the eco-system. They also play an important role in challenging lion and leopard numbers, ensuring the eco-system is well balanced. Large clans of hyenas are typified in the Ngorongoro Crater in Tanzania and parts of the Sabi Sands in the Greater Kruger where they can be seen battling lions, leopards and wild dogs. 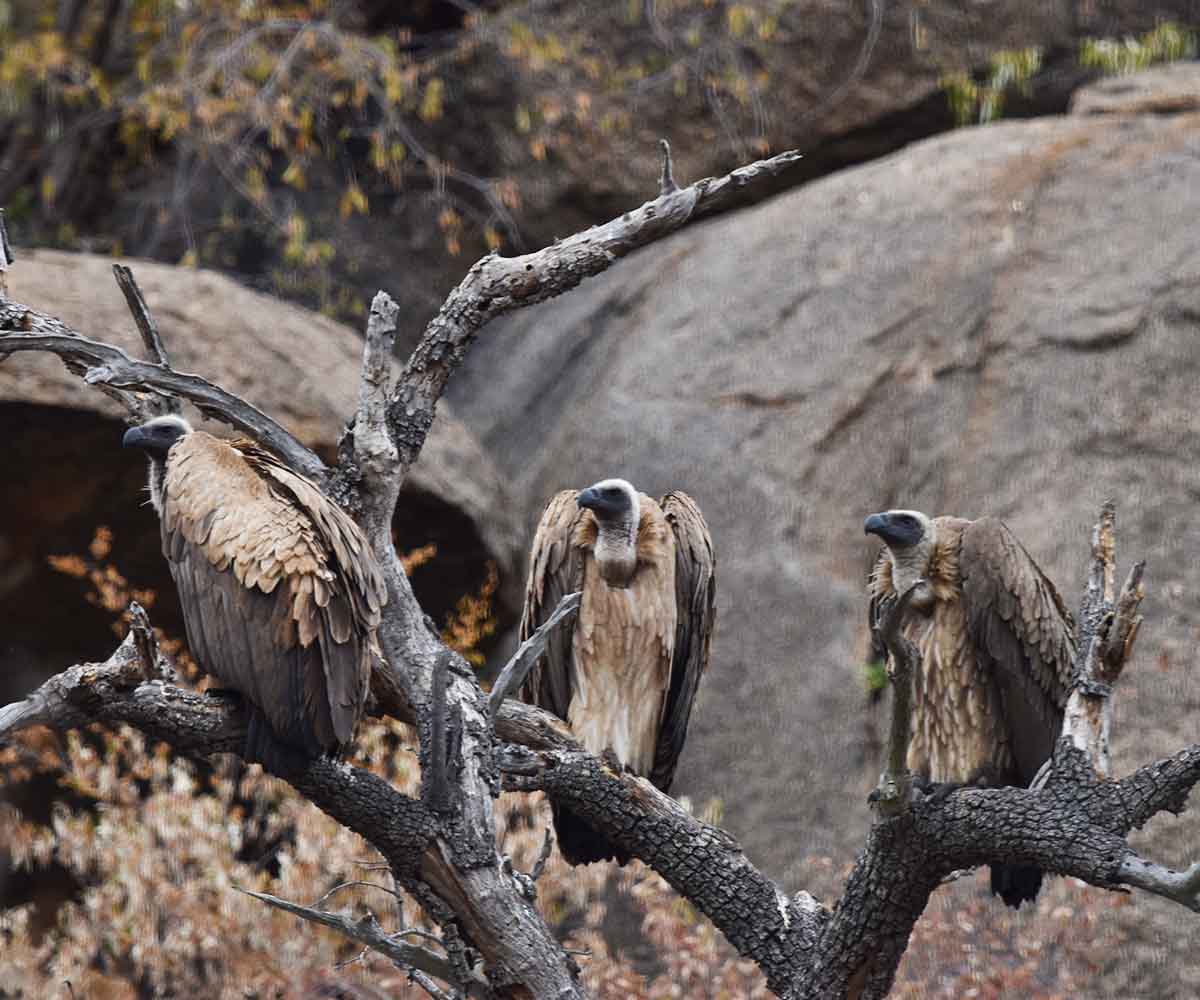 Vultures are becoming one of Africa’s most endangered bird species, not that you would think so. Yet with mass poisonings and human settlement continually encroaching upon natural space, vulture numbers are rapidly declining.

Arguably the ugliest of the Ugly 5, is the marabou stork. With a bald head and a fleshy neck, this bird is certainly not going to win any beauty contests soon. However, just like the vultures and hyenas, they play a very important part in the cleaning up of carcasses and ensuring nothing goes to waste. 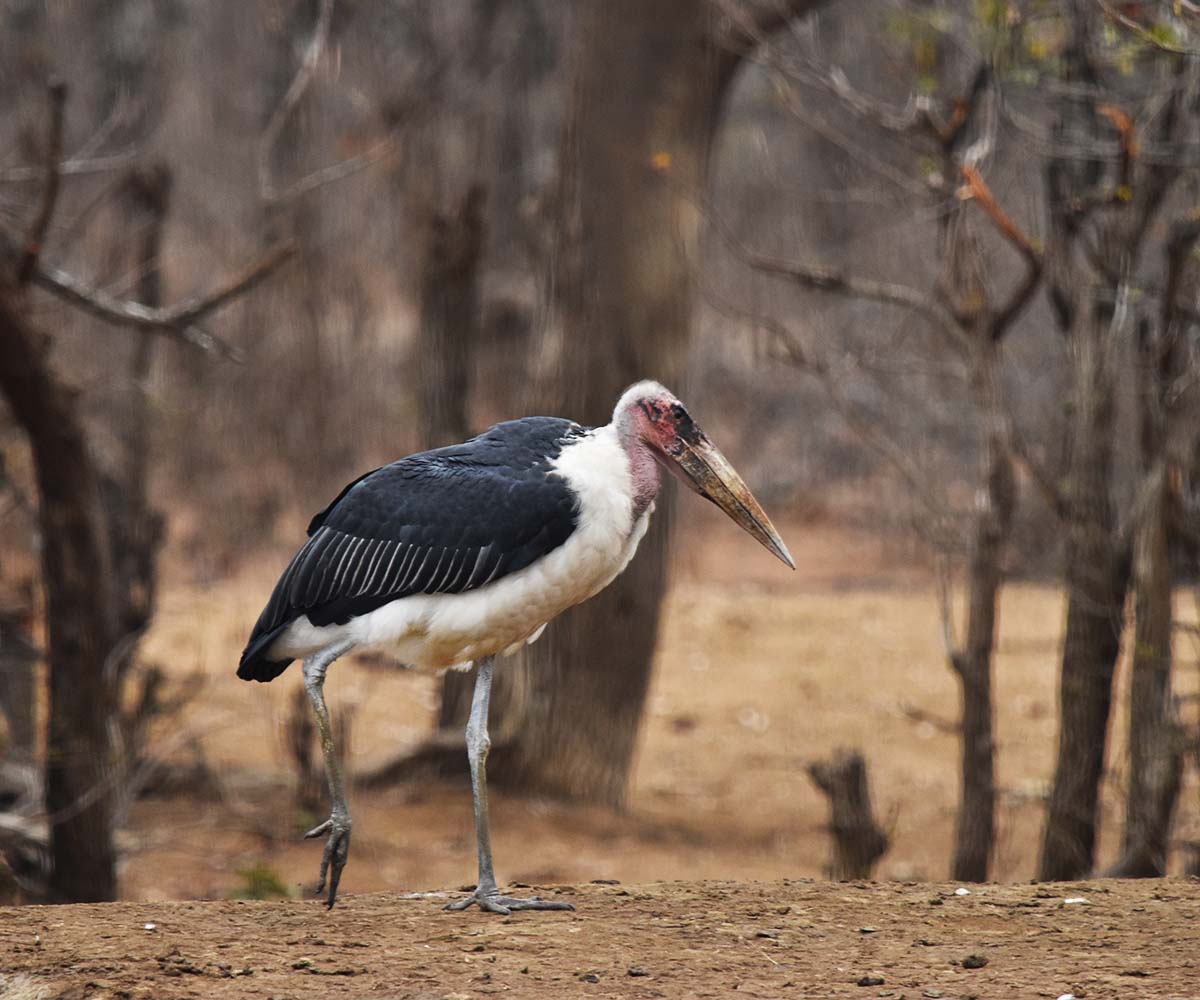 Whilst the Lion King destroyed the reputation of the hyena, it certainly helped elevate that of the warthog, or Pumba as everyone knows them by. Often found digging for roots, warthogs can be found all over the continent and seem to thrive in most habitats. The ‘warts’ on their face are what gives them their name: males have two warts on either side of their face whilst females only have one on either side. 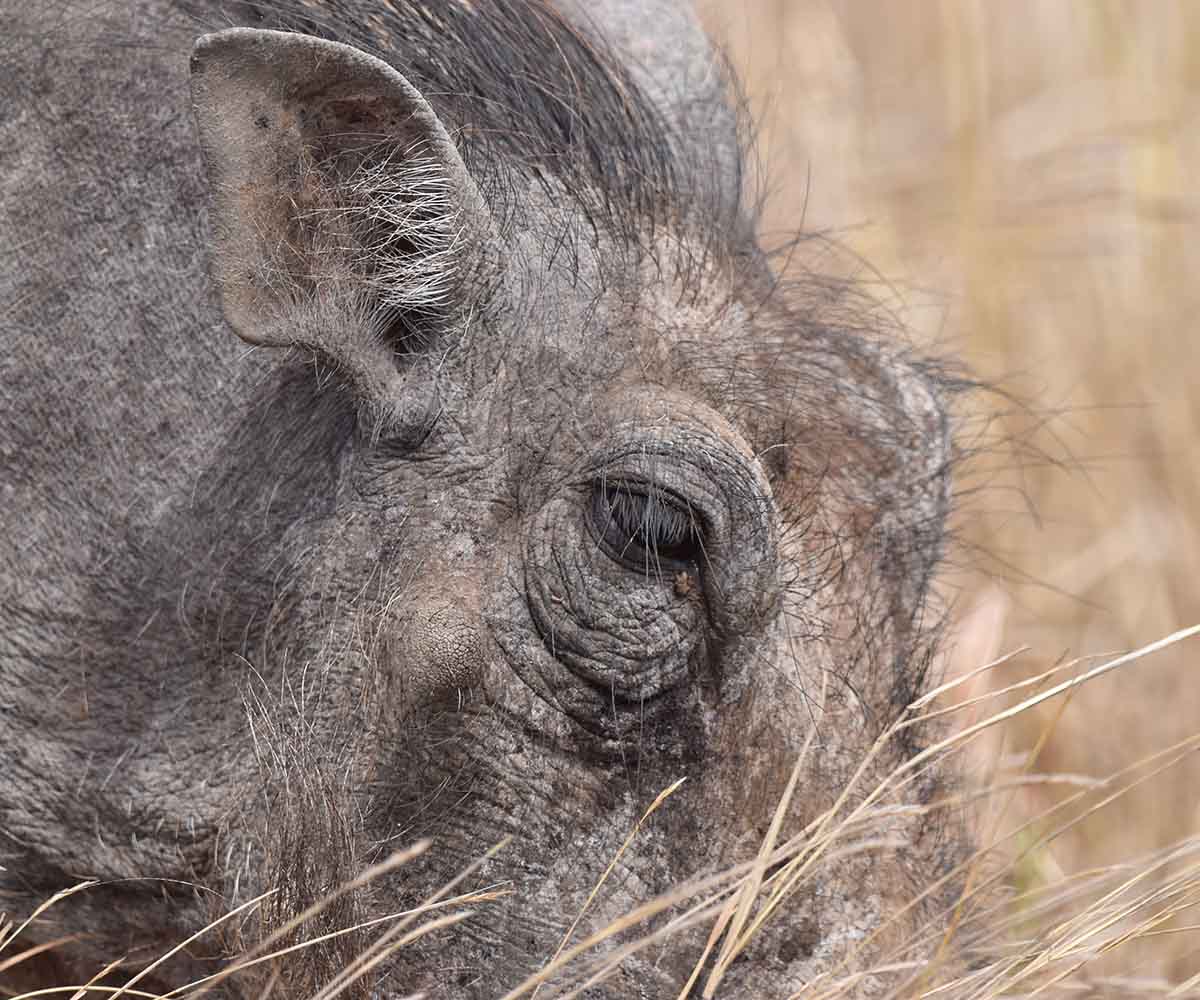 Warthog – are they really ugly or really cute? © Sam Hankss

Best known for their migration in Tanzania and Kenya, the wildebeest is the last member of the Ugly 5. Legend has it, the wildebeest is made up of all the left-over parts of the animals when ‘God’ created the animal kingdom. From the body of a hyena to the horns of a buffalo, there is nothing quite as odd looking as a wildebeest. Yet their migration through the Serengeti and the Masai Mara is one of the most enthralling wildlife spectacles on the planet. 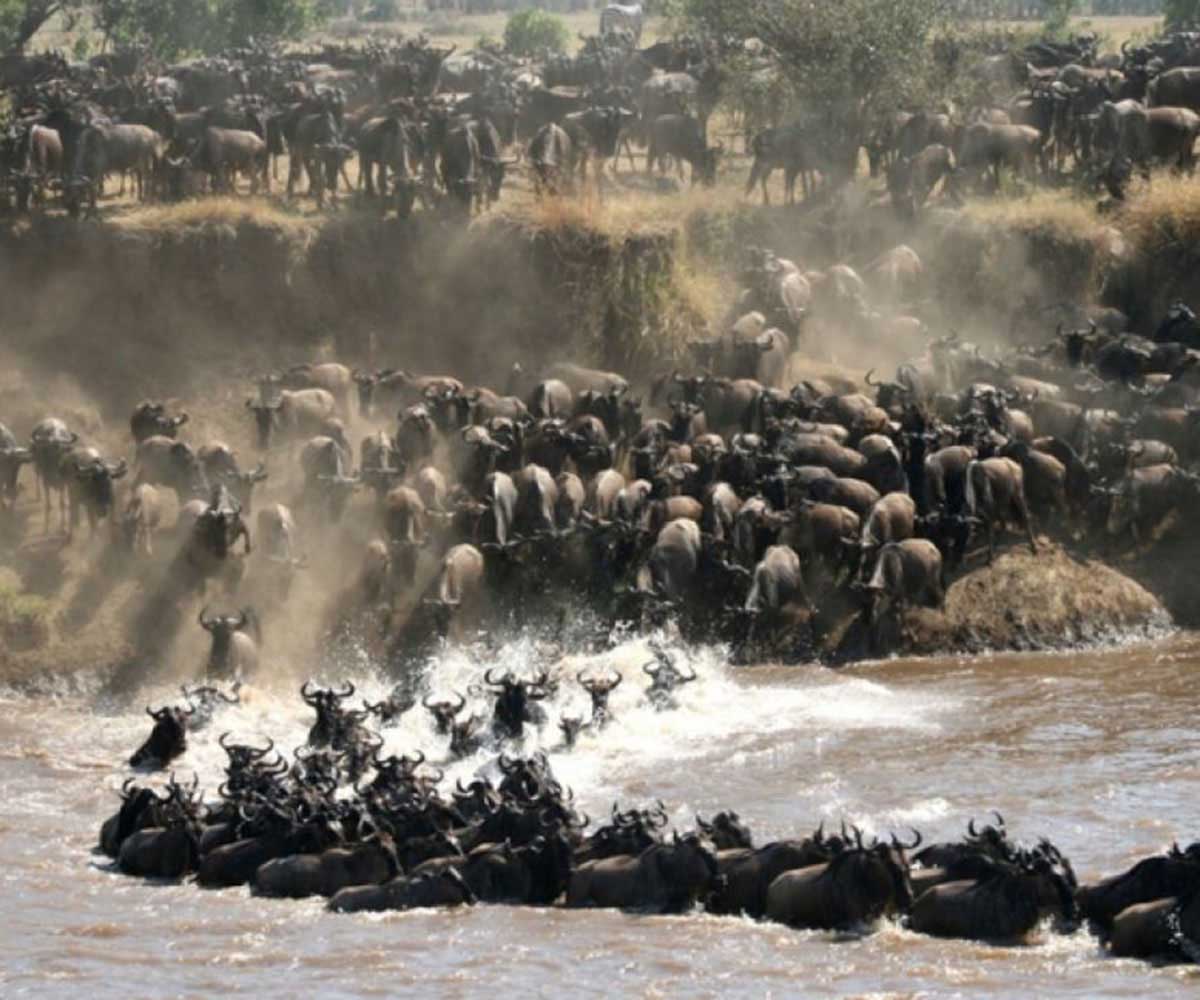 Generally found in Sub-Saharan Africa and preferring very arid/desert habitats, the shy five are some of the most docile creatures you would come across on safari. Meerkats can be found in areas of the Kalahari in Botswana and with several habituated groups, photo opportunities are excellent. Spend the morning watching these creatures go about their daily antics, whether it is digging for food or suckling their young, you can be sure they will entertain you for hours. This region is also perfect for spotting another member of the shy 5: the bat eared fox. Aptly named for its huge ears, the bat eared fox is a timid creature. Often seen bathing in the morning sunlight outside their dens, a morning safari gives you the best opportunity to see these little animals. 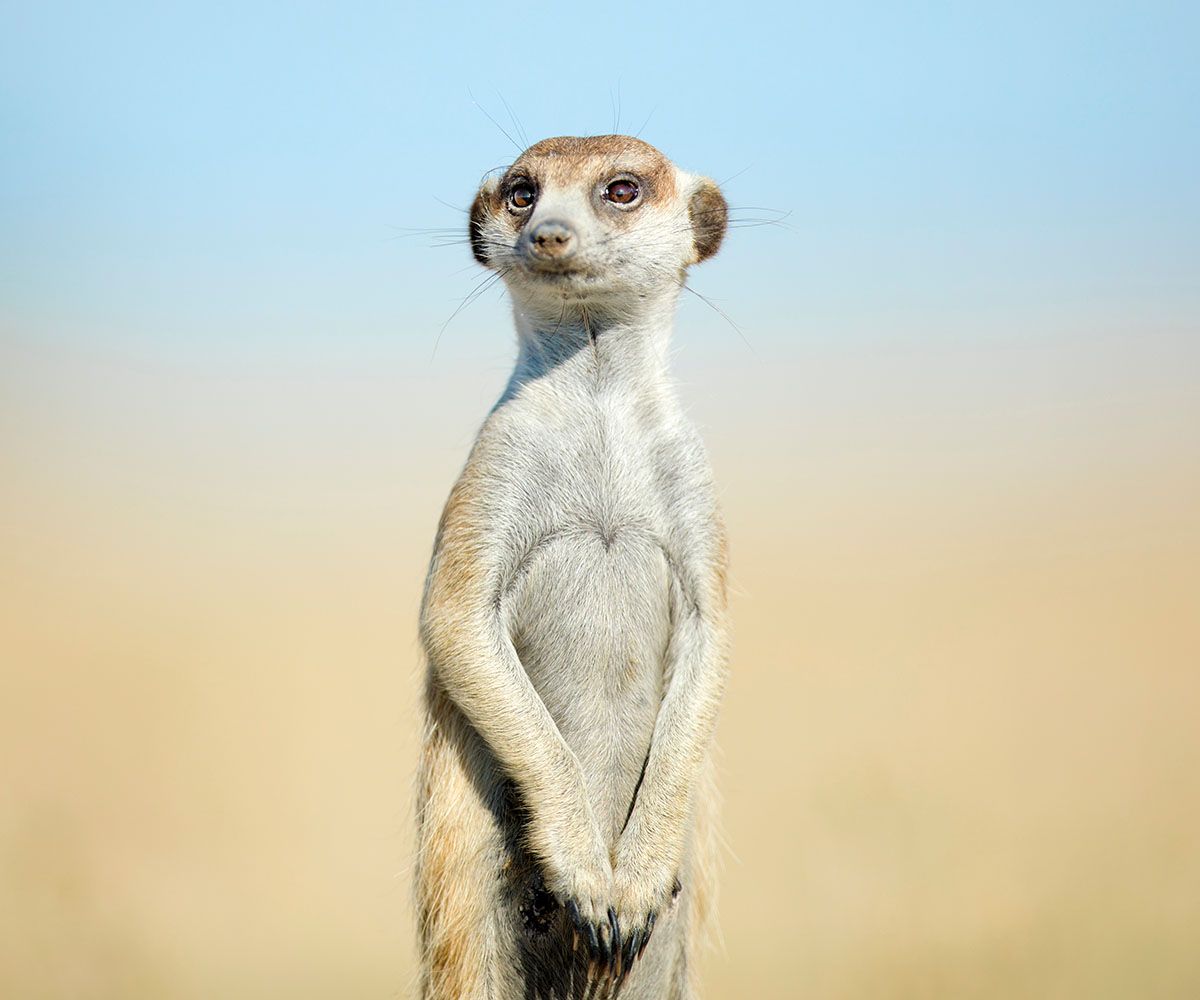 Meerkat on the look-out.

The next three of the shy five are perhaps the hardest animals to spot on safari. Although they are very shy in nature, their habits tend to be nocturnal, when it is coolest, so spotting them is even harder. Tswalu in South Africa is the place to go to tick these three off your list. The aardvark, aardwolf and pangolin are all very special creatures and Tswalu’s excellent conservation work and ideal habitat makes finding these animals a regular occurrence. 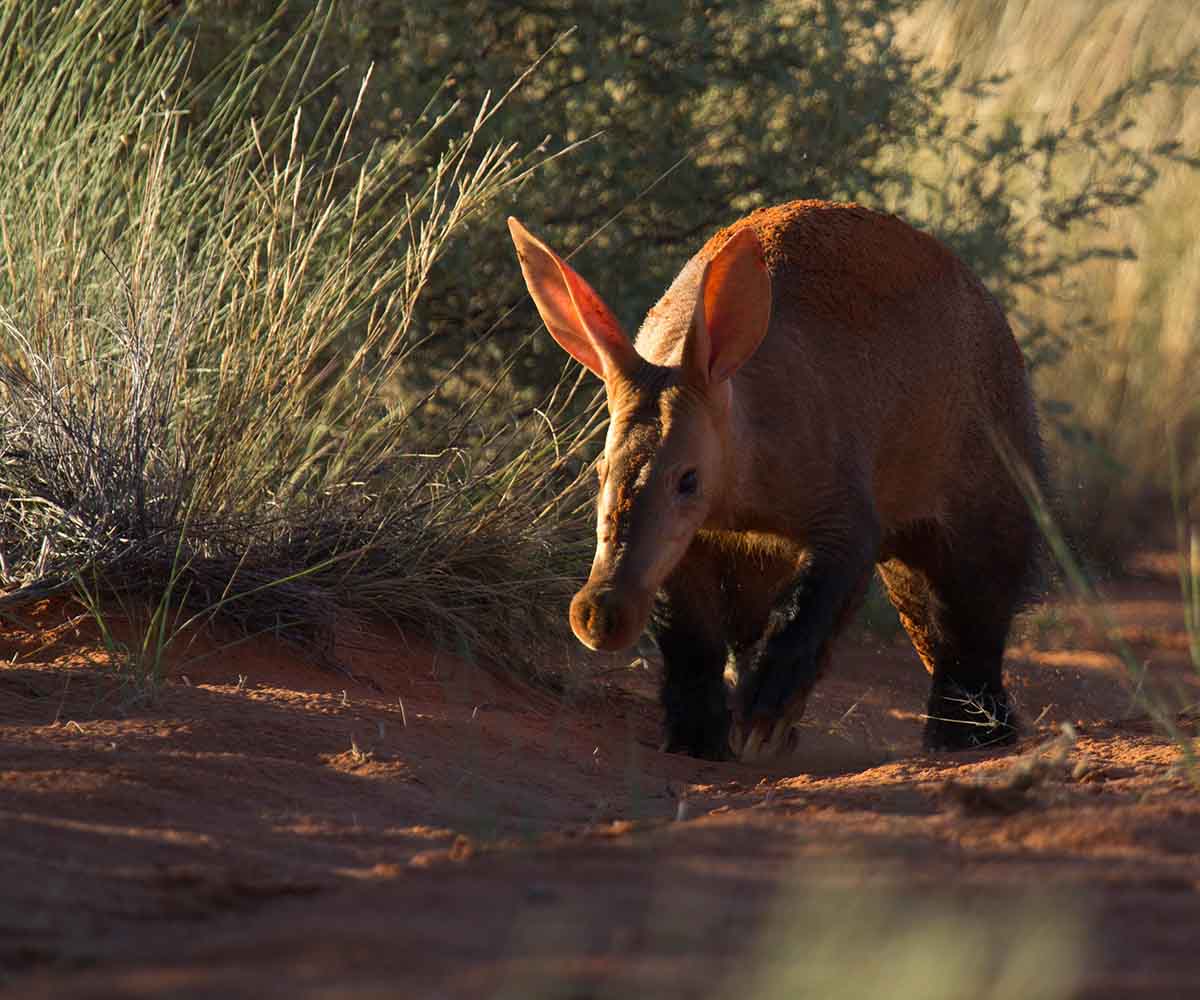 Officially the porcupine is part of the shy 5 (we added the pangolin as we felt this was more necessary) yet the porcupine should still get some recognition. Nocturnal by habit, these incredibly hardy creatures are Africa’s biggest rodent and are found in most safari destinations. With spiny black and white quills that can cause an opportunist lion or leopard serious problems, the porcupine is often seen scuttling about during the night, often coming into camps to see if there are any morsels of food to be had.

Although not an official list, for those who are keen birders or for those who haven’t found their love of birding yet, here you will find our favourite bird species to try and find on safari with some being harder than others.

By far one of the easiest birds to spot on safari is the beautiful lilac breasted roller. With a multitude of colours, from dark lilacs to vibrant blues, this bird is certainly not one you will miss. Unfortunately, its call is certainly not as beautiful as its appearance and sounds like a car engine trying to turn over. Found throughout Africa, a safari is not normally possible without coming across one. 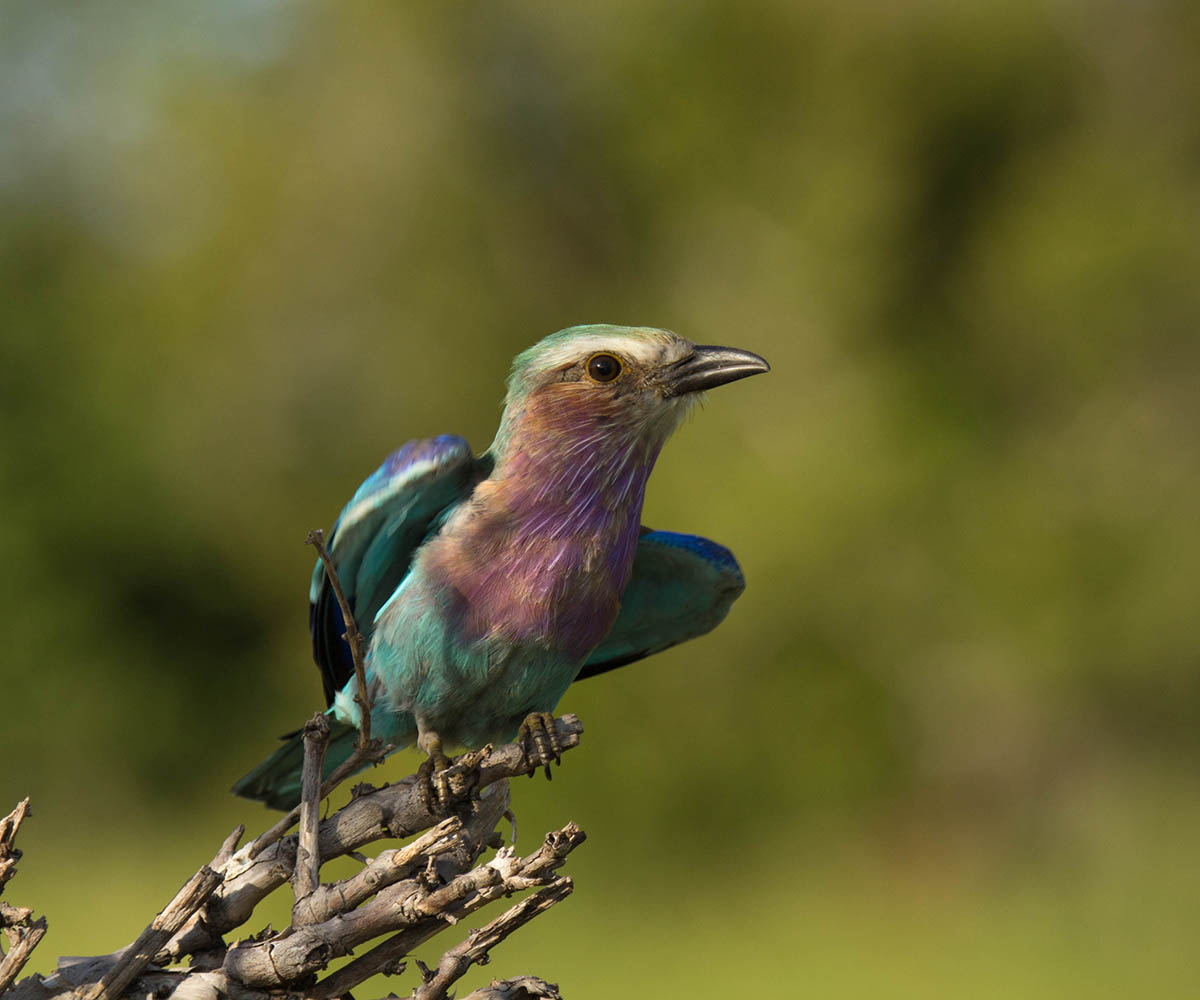 Two terrestrial birds that are highly sought after are the turkey-like ground hornbill and the elegant secretary bird. Both seek habitats of open grasslands dotted with acacia woodlands, some of the best places to see these birds are in the Serengeti, Tanzania and in parts of the Kruger National Park, South Africa. Both spend the majority of their days walking amongst the long grass looking for an assortment of food which include leopard tortoises, snakes and small mammals. Whilst the ground hornbill uses its robust bill, the secretary bird stamps down with its long legs to kill and catch its prey. Both species are becoming ever more endangered so to see either (or possibly both) is a brilliant sighting to have. 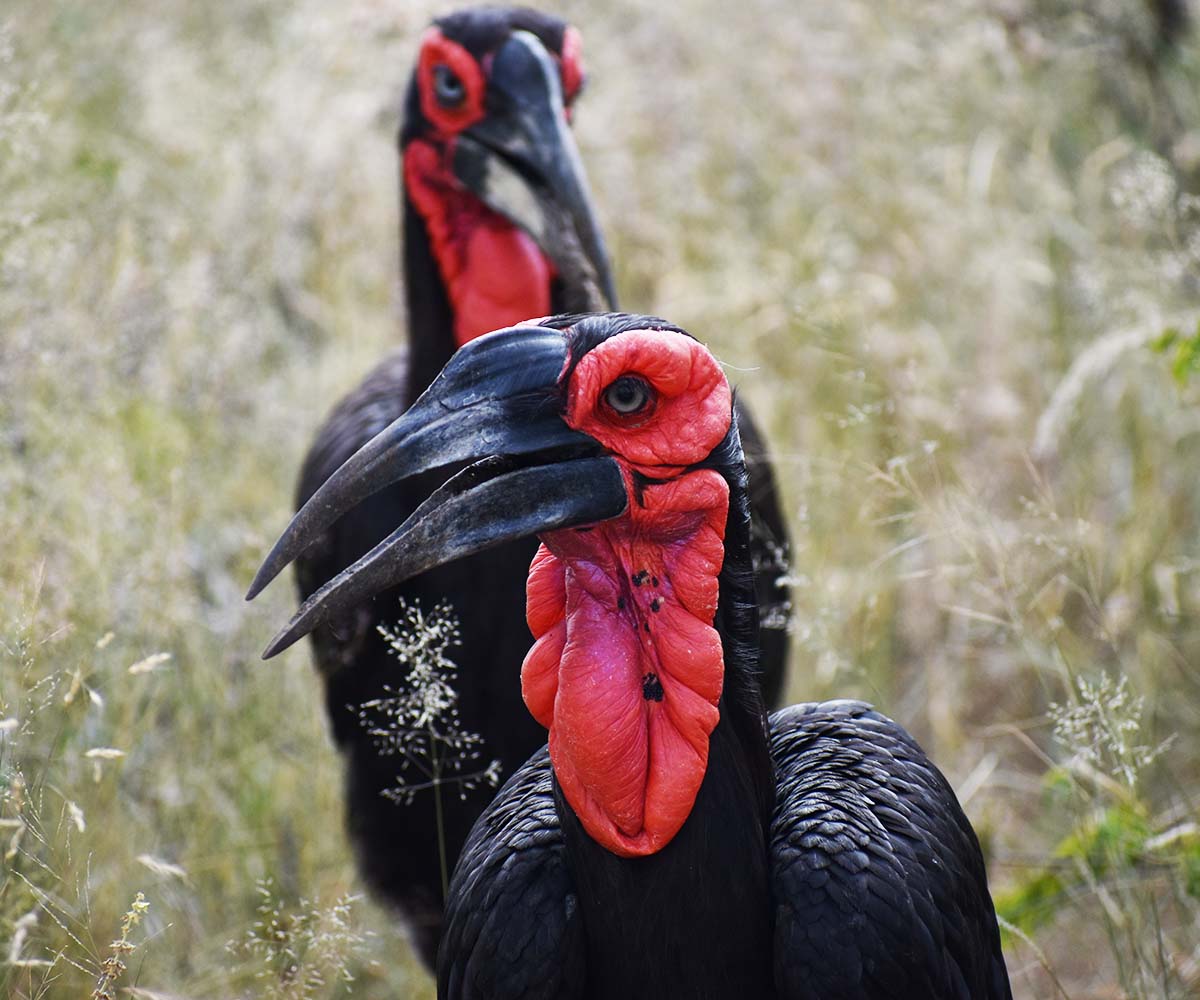 The fourth member of our bird list can be seen yearly nesting in the banks of rivers in the South Luangwa National Park, Zambia. Every August the flocks of carmine bee-eaters descend upon the area to breed and although the birds can be seen in Kruger and the Okavango Delta sporadically through their summer months, the nesting habits of the bee-eaters is truly magnificent to see. With special hides designed and located to get the best photos of the bee-eaters whilst they nest, Zambia is the best place to get some stunning photos of these beautifully coloured birds. 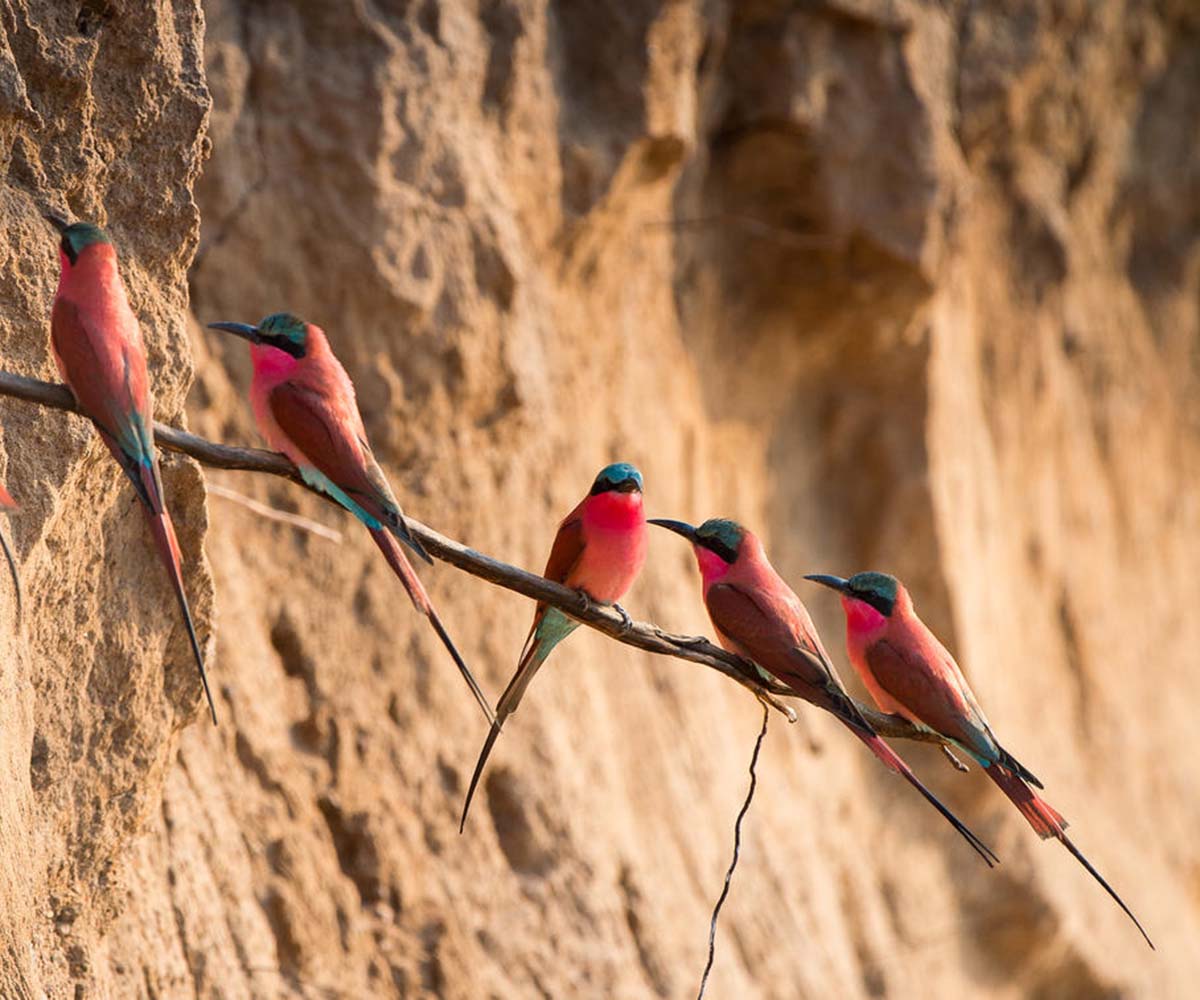 Our final bird for you to look out for isn’t as localised as the carmine bee-eater, and although it generally is a solitary bird, the martial eagle is arguably the most beautiful and regal of all of Africa’s raptors. With a white chest mottled with dark brown spot, a chestnut coloured back and a gorgeous deep orange-yellow eye, you would not forget this bird easily. Capable of catching anything from water monitors to young impalas, the sheer size and strength of the martial eagle makes it an apex predator. 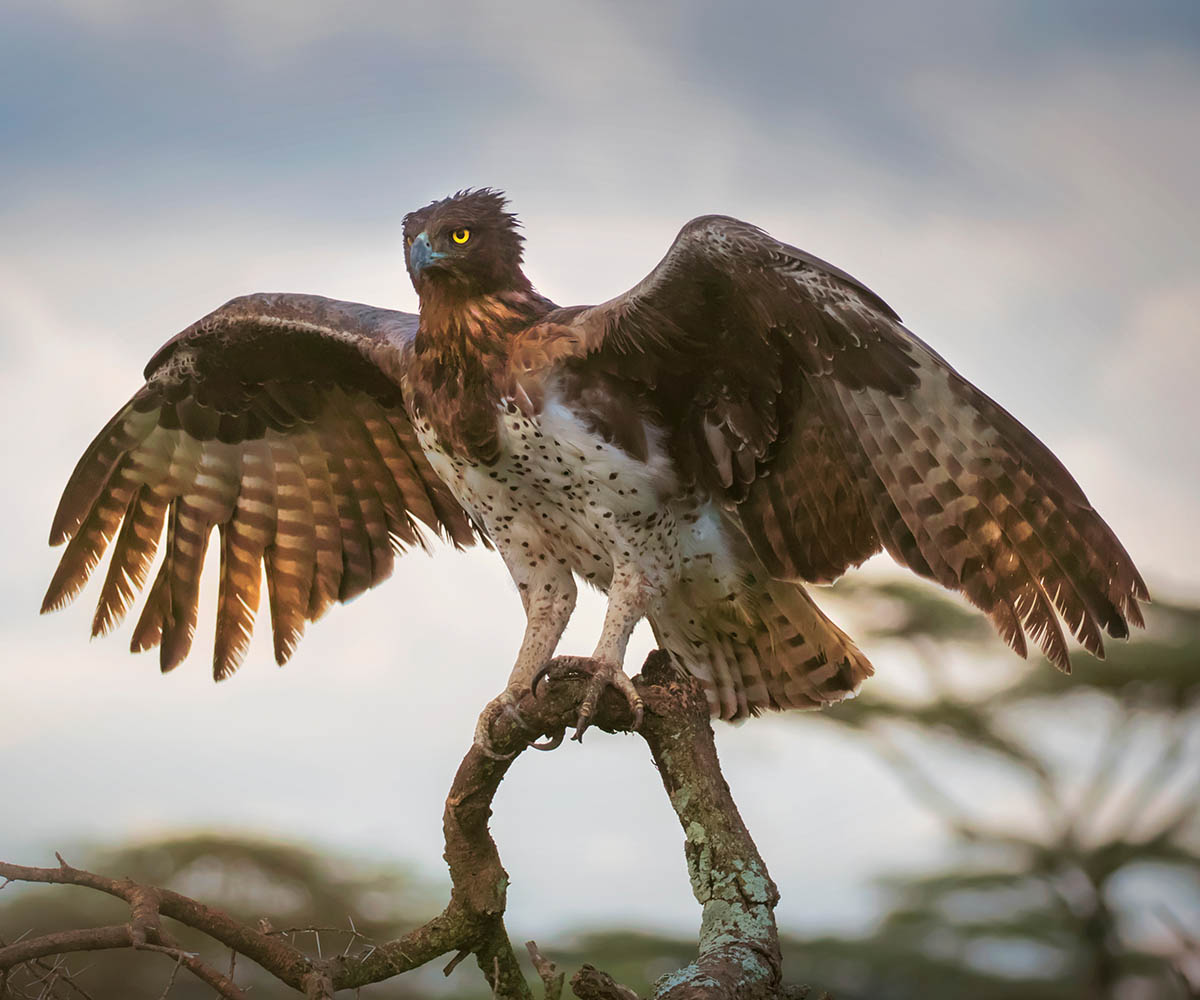 Regal and imposing: the martial eagle.

No matter where you go on safari, there is always something new to look out for, but if you are after finding something in particular, although nothing is guaranteed on safari, chat to one of our experts to find out what destination can give you the best chance of finding the animals you wish to see.