If it’s not on YouTube it didn’t happen, right?

With so many safari enthusiasts heading into the bush with cell phones, go pros and video cameras, this isn’t too far from the truth! As a result, there is an exuberant amount of wildlife videos out there, from amateur to professional videographers alike, showing the world what happens in the unpredictable wilds of Africa. 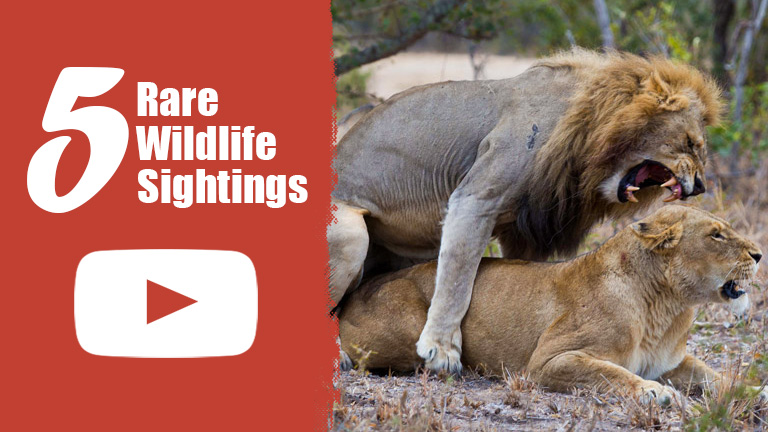 From the downright terrifying to the adorably cute, here are 5 rare wildlife sightings you just have to see to believe:

Lions get down to business for guests at Tintswalo Safari Lodge in the Greater Kruger National Park. Male lions sleep on average 20 hours a day and females sleep up to 18, so the chances of seeing lions mate is extremely rare, exhilarating and well, aggressive!

A young elephant bull in musth shows a male white rhino who’s the real boss of the animal kingdom. The elephant’s impressive balancing skills of a tree branch with his sword-like trunk is quite the cheeky ending to the testosterone-filled tussle.

Not one, but five cheetahs (one adult and four cubs) hop onto a game vehicle in the Maasai Mara National Reserve to get a better view of potential prey. The crowning moment? When one cheetah bent right into the jeep and kissed the tourist’s camera lens!

A family of gorillas at Odzala National Park take a break at a root site somewhere deep in the Congo. As the adults feed on the roots of the trees, the younger gorillas run around in circles playing a cheeky game of tag in the forest!

A couple camping in Botswana woke up to find three nonchalant lions licking water off the outside of their tent, refreshing themselves with pools of rainwater that had fallen overnight. “What a privilege,” says the campers, when recounting the rather alarming wake up call!

Like what you see? Let us help you plan a life-changing safari created just for you!