With the Safaricom Lewa marathon taking place this weekend – we thought it would be good to write about this amazing event from our personal experiences of 2015 and 2014…. each year I seem to get progressively slower!

We arrive early and there is already a buzz in the air. Excitement all around and nervous anticipation can be seen in the faces of all the runners who are about to embark on one of the world’s toughest marathons (or half marathon as the case maybe for the majority!). The sun is just rising – a beautiful orange – shining through a haze of dust created by the 1,400 or so runners making their way along dirt roads and tracks to the start line. We are about to run a half marathon through the 62,000acre Lewa Downs wildlife conservancy. One of Africa’s most incredible conservation success stories and a UNESCO world heritage site.

Two helicopters buzz overhead and the hear the whir of light aircraft in the distance – “they’ll be clearing the wildlife from the course before we start” a friend informs me! I hope that is indeed the case, Lewa is teeming with game – large herds of elephants and buffalo roam freely in the conservancy, a healthy number of lions and East Africa’s largest population of both black and white rhino … it adds to the challenge and reinforces why this is such a special event to be a part off. Running in the wild, with wildlife and most importantly, for wildlife.

Even at 6:30 the sun is already impossibly high and getting hotter. I feel like I’m on the set of an action film – walking towards the starting post through hundreds of khaki safari tents set up for the specifically for the event in a stunning grove of Acacia and Yellow Fever trees – it reminds me of an old military encampment. The colours of thousands of supporters and runners are a wonderful contrast to the traditional Khaki; bright greens and reds and blues and whites, Kenyan flags fly in a gentle breeze and the banners of the event sponsors, Safaricom and Tusk Trust seen everywhere – a DJ on a raised platform is playing a mixture of traditional African and inspirational music which adds to the carnival atmosphere.

The 10 second count down begins, everyone cheering – and we’re off, like a stampede of wildebeest crossing the Mara River; being squashed and funneled from an open plain onto a thin dirt road. The first 5 mins is total chaos – 1,400 runners sprinting and pushing to get in position, quad bikes racing past and helicopters overhead! Adrenaline pumping, a long line of colour stretches its way out in front of me (as well as a little bit behind!) snaking its way up and around one of the large hills of Lewa that needs to be climbed! How have those incredible Kenyan athletes got so far ahead in 10 mins!?

Underfoot is a dirt track, littered with rocks, every step taken creates a small cloud of dust, it is hot – and only getting hotter. The altitude of 6,000ft (the same height as the ski resort Courchevel in the French Alps) makes my lungs burn! And yet – I am thoroughly enjoying myself! Running through some of the most stunning landscapes in East Africa takes your mind off the grueling 21km’s with nearly a 2000m climb! The water stations at 2.5km intervals are a welcome break! Enthusiastic crowds gather and cheer us on offering us water and isotonic drinks as we enviously look on at their delicious bush breakfasts, champagne, bloody Marys and Tusker beers!

We push on past the river banks of the stunning Sirikoi Valley, up steep hills and through the stunning savannah interspersed with typical Acacia and Balanites Trees. We pass zebra and numerous antelope who look on curiously – I’m sure wandering what the cause of the stampede is! Up more hills and passing more spectators. The snow-capped peaks of Mount Kenya loom over us from the Conservancy’s southern boundary. The rolling hills are seemingly endless, with the Mathews Mountains and the iconic Mount Ole Lolokwe dramatically rising to the North. The sheer beauty of this place coupled with the supporter’s generosity and the fellow runner’s keen spirt takes your mind from the aching knees, tired muscles and tight(ening) lungs.

Finally reaching the top of the last hill and seeing the tents of the camp and the Safaricom and Tusk Trust flags flying near the finish line! Whoops from other runners echo around me, I’m exhausted and it still looks like a fair distance to go… the final push. Down a horrible hill which jars already painful legs and an arduous final 5km to the finish line…
The 200 uber –fit and slightly insane runners, who have to endure the full marathon, turn right to complete another circuit, I thankfully head left and hear the roar of a crowd coming closer. Thousands of local children revel in the amazing atmosphere cheering us on into the finish line, a medal, massage and cold beer at Lewa Safari Camp await!
The Safaricom Lewa marathon is without a doubt an enjoyable experience shared by competitors and spectators alike, a wonderful up-beat atmosphere that welcomes people from all over the world. But it is important to not lose sight of what the Lewa Marathon stands for. Since its conception in 2000 the Lewa Marathon has raised over $5 million for conservation and grown into an internationally acclaimed event, one of Kenya’s major sporting events and listed in Runners World as “top ten must do marathons”. Last year more than £400,000 was raised to support different projects across Kenya. The main three are all essential in the protecting our worlds natural and wild places; Supporting communities, promoting education and protecting wildlife. All three go hand in hand. Wildlife conservation can be used as a catalyst to alleviate poverty, reduce conflict, and improve education and livelihoods in rural areas rich in biodiversity. And of course that in turn aids the protection of wildlife, especially the endangered and targeted elephant and rhino.

What an experience, running wild, for wildlife and helping to secure a future for wild places in Africa.
The Lewa Marathon will be held this year on the 25 of June 2016. Registration for the 2017 Marathon (also held in June) will open in February 2017. Lewa is situated at 5,550ft above sea level and the course records are 2:18:42 for the full marathon and 1:05:00 for the half marathon. 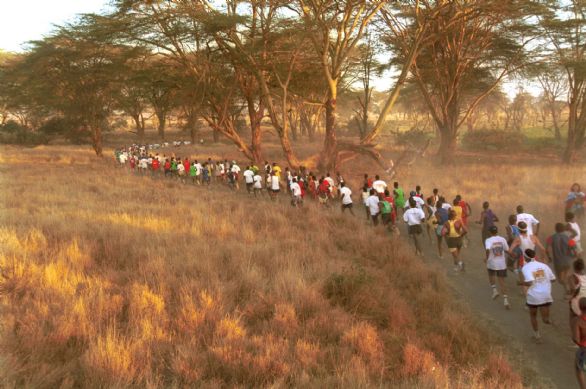 The start of the Safaricom Lewa Marathon; through a stunning grove of Yellow Fever Trees.

The front runners making headway during the Safaricom Lewa Marathon.

Where to see the animals from The Lion King: The animation in the flesh with Africa Odyssey