It seems that I’ve waited forever to go on a safari trip but the timing was just never right, and I also couldn’t decide which African country to go to.

This year, while planning hubby’s mandatory 2-week leave I stumbled upon a company called Tanzania Odyssey based in London that specializes in safari trips in Tanzania and Kenya.  After corresponding back and forth with Ted from T.O. for a while I decided to use them to plan our trip.  More emails and phone calls later, our itinerary was set, six months before the trip date.  I thought I was being organized, but it turned out most of the people plan for their trips more than a year in advance! 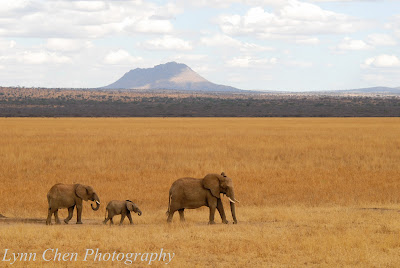 Exactly twenty-five hours after taking off from Changi airport, we arrived in Arusha Coffee Lodge in a coffee plantation, where we would spend the night before driving to Tarangire National Park. As we were led to our suite by the porters I felt stinging sensations on my legs which turned from itchy to painful.  After we entered our room I rolled up my pant leg to find a huge red ant crawling up.  I had to quickly dash into the bathroom, take off my pants and kill off the dozen or so ants that werecrawling all over me.  Welcome to Africa! The next morning we woke up to a rain soaked chilly morning. Everything was so green and the coffee plants were drenched in rain drops. I wish we could spend more time here, but there are animals to be seen, so we set off after a yummy breakfast to Tarangire National Park.
The park is famous for its vast elephant populations and sure enough, we had our first elephant sightings within five minutes of entering the park.
October is the end of the dry season in Tanzania and the park is mostly yellow in color, but there are some water holes where the animals congregate during the day.  In the wet season, the park is much greener but animals are dispersed throughout the park, which makes sighting a little more challenging.

I think what struck me the most is seeing how different species of animals all live together: zebras and giraffes and wildebeest leisurely grazing in the same area, with a few warthogs darting in and out. It was a picture of harmony.
On the way to Oliver’s Camp, our home for the next three nights, we found our way across the river blocked by a herd of bathing elephants.  They took their time splashing and drinking, then one by one walked up right next to our car and into the open plain. As our car rounded a corner and the golden plains spread out in front of us I saw hundreds, if not thousands of little black dots in the horizon.  Are they wildebeests? I looked into the binocular and the black dots materialize into elephant shapes. The awe I felt at the moment of seeing so many wild elephants congregated in one area is indescribable.  In certain areas of Africa elephants are heavily poached for their ivory, but here in Tarangire it is truly elephant paradise.
Our guide told us that elephants are very destructive eaters.  They consume more than 100kg of food per day and will strip a tree bare in minutes. Tarangire can support such a large number of elephants because it has an abundance of food supply, among which are Acacia trees which have long spiny thorns all over, that only the elephants can eat.  Elephants don’t digest their food well so other animals such as monkeys will pick through elephant dung and find edible things in it.  There are also large termite populations that break down elephant dung so that the park is not buried knee deep in stinky elephant feces. Isn’t Mother Nature wonderful in how nothing is wasted and every species has its role in maintaining the balance and harmony of an ecosystem?
Over the next two days we saw a variety of wild animals including tree-climbing pythons (another Tanagire specialty); zebras taking mud baths; giraffes walking in their leisure, graceful way; a leopard killing a mongoose; vulchers preying on a waterbuck abandoned by a leopard; and many many more. My favorite area in the park is a swamp/marshland where a lot of animals go to drink during the day. I could sit there for hours just staring into the vast openness and have nothing on my mind except watching the animals frolicking in the mud, and wishing I could do this everyday. 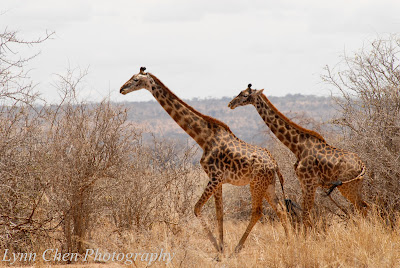 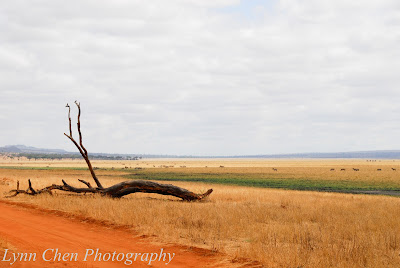 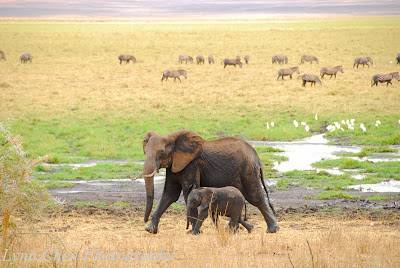 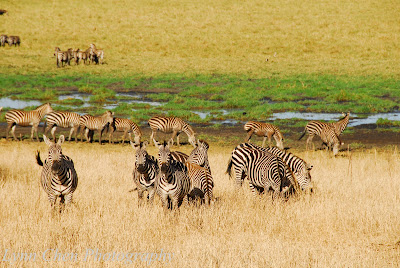 Now a review on Oliver’s Camp. The camp is run by an Australian couple Ken and Michelle who are wildlife photographers who have travelled extensively around Africa for years. Their knowledge of wildlife and Africa in general is amazing and I learned a lot by talking to them at meals and around the camp fire. As a type-B and scatter-brain, despite all the lists I made for this trip, I brought the wrong camera cable and was at risk of not being able to download photos to my iPad in order to re-use memory cards. Just as I was counting how many GB I have and how many photos I was allowed to take each day, dumb luck struck! It turns out Ken and Michelle use Nikon cameras and had extra cables to spare. Not only did Ken let me borrow one, he gave it to me so I wouldn’t have to worry about memory space for the rest of the trip.  How nice!
The “tents” at Oliver’s camp are permanent structures, so even though they are essentially canvas tents, there’s a thatched roof on top, with running water and flush toilet inside. The shower, on the other hand, is completely out in the open, which is a little nerve wrecking to say the least, considering there are wild animals around. On the first night, we were a little weary about the mesh layer that runs the entire front of the tent, which stays open at night. What if a lion finds us tempting and wants to get in? Surely the mesh won’t stand a chance against the iron claws? We were reassured however that the wild animals respect the tents for some reason and as long as we stayed inside we’d be safe. During our three-night stay, we had an elephant eating from a tree less than 10 meters away from our tent, a hyena that came right up to the tent until he saw me through the bathroom window, and woke up to many strange footprints outside in the morning, but somehow, we both had sound dreamless sleeps every night. 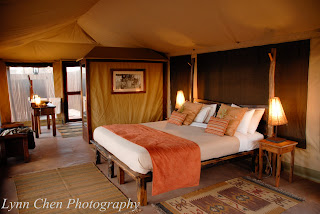 At Oliver’s, guests have the option of going on a walking safari in addition to the game drives, which I highly recommend. The experience of being right there with the animals, as opposed to hiding in a steel clad safari vehicle puts a whole new perspective on things.  Unfortunately for us, the afternoon we went on the walking tour was the only day it rained, except for the first morning, on our entire trip, so our walk was cut short and we were completely soaked. We did manage to observe a herd of elephant up close, some zebras, and a pair of jackals before the sky opened up and dumped on us, so it was not a complete loss.

Where to see the animals from The Lion King: The animation in the flesh with Africa Odyssey