“Once salt rises in park’s Southern waters, animals migrate north”. Something in the water in Tanzania’s Serengeti National Park is spurring the world’s most spectacular migration, according to a new study.

One of the spectacular and unique event of the year is the Serengeti wildebeest migration, which takes place between the months of November and July following year. This has been described by many as one of the greatest natural events in the wildlife world. Each year a legion of nearly two million wildebeest, zebras and gazelles circulate through the park, settling in the verdant grasslands to give birth while the rivers flow and new wet season grasses grow in endless abundance. Then, as if. spooked, the herds suddenly begin to trek north in late May or early June, leaving behind an apparent paradise.

“When animals leave the south, there’s still plenty of green forage,” Ayron Strauch of Tufts University said. “And plenty of water.”
Strauch and Frances Chew, also of Tufts, now think they know what sparks the exodus: An invisible, rising tide of salts in the rivers from which the herds drink.

Late in the wet season, the plains in the southern part of the park appear healthy and full of nutritious food, but the rain has already begun to slacken. When Strauch and Chew sampled water from the Mbalageti and Seronera Rivers in the region, they found that concentrations of calcium, sodium and potassium salts soared to levels that could be dangerous to the animals’ health.

“These nutrients are vital to life on the plains, to be sure,” Strauch said. “But as base flow in the rivers decreases, concentrations of these nutrients sky-rocket to hundreds of times what animals might encounter in the plants they eat.”

Strauch will present the research next month at the annual meeting of the Ecological Society of America.

Studies of farm animals have shown that elevated salts in the water supply can cause cardiovascular disease and kidney failure in adults and cripple females’ ability to lactate. New-born animals that drink tainted water can suffer from impaired bone and nerve development, and have trouble gaining weight.

The same may hold true for Serengeti’s wild herds. Strauch and Chew reason that the spike in salt content in the southern waters acts as a signal that it’s time to move north, before the harsh dry season sets in and food sources begin dwindling.

However, John Fryxall of the University of Guelph in Canada said declining nutrients in grasses may drive migration, rather than water quality

“These animals need the green flush of nutrients in early growth-stage grasses,” he said. Grasses growing late in the wet season are too long and full of woody material that animals can’t digest.

In addition, animals also have to compete with humans living nearby for water. Villages surrounding the park are swelling, thanks in part to tourism generated by the famous wildlife. Local inhabitants are increasingly diverting river water for irrigation and drinking.

“There is increasing demand for a finite water resource,” Fryxall said. “Future changes in water quality will be important to pay attention to; worsening quality could impose additional mortality on the animals.” 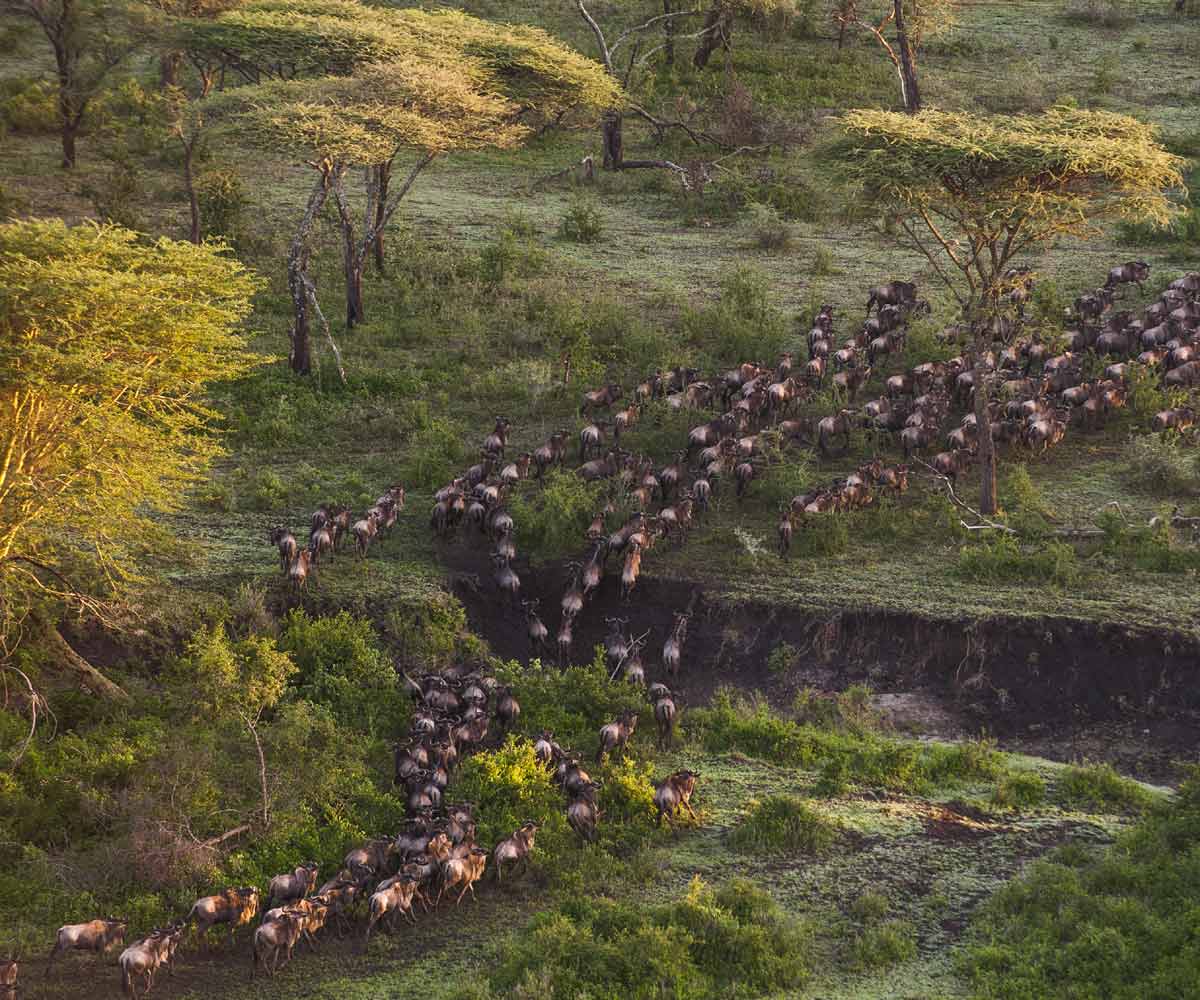 Observing the animals on the Serengeti plains may bring to mind the decadence of a midnight buffet, the kind you find in Las Vegas or on cruise ships. A bonanza of feasting goes on: The greatest concentration of grazing animals on the planet, including wildebeests, zebras, gazelles and antelope, are there, munching on grass. As they feed, lions, hyenas and other predators feed on them, while vultures swoop in to clear the table, so to speak.

But the thought of all-you-can-eat buffets is likely your last thought of human civilization when you witness the Great Migration Every year, the grazing animals cross hundreds of miles, from the Serengeti in Tanzania to the Masai Mara National Reserve in Kenya and back again, to eat fresh grass, watered by the rains. Once these animals start moving, you have the sense of something primal.
In short: You’re seeing something that’s been seen by very few humans before.

The animals’ movement starts quickly and without any discernible warning. How do they know it’s time to move, you may wonder. While everything looks normal and serene on these grasslands to you, wildebeests can sense a thunderstorm from 30 miles away. They follow the scent to get the best grass.

For people who like to count sheep before going to bed, the migrating animals represent an insomniacs dream it would take almost 35 sleepless days and nights to count one migrating animal per second. The line of animals would stretch back for miles, giving you plenty of time to add up those 3 million animals, the majority of which are wildebeests. Nothing, not massive lines for Black Friday sales or queues for a subway after a down-town sporting event, could prepare you for that many animals moving together at once. The line of animals may stretch back as far as 25 miles.

But your ability to count the running wildebeests and leaping gazelles may be hampered by the beating hooves hitting the ground in the race for fresh grass or the cacophony of grunts and snorts that fill the hot air.

While the grazing animals leave many of their natural predators behind in the Serengeti, the trip, which may cover as many as 1,000 miles, isn’t without its dangers. When the wildebeests go leaping and splashing through rivers, you may spot a hungry crocodile emerge from below to snatch them. But the wildebeests will gain in numbers again in the early spring, during foaling season. Many in the group will give birth all at once, and their labour is quick. Look away for just a second and you may miss the foal making its entrance into the world. The tiny wildebeest will get its footing, and then the race for grass is on again.