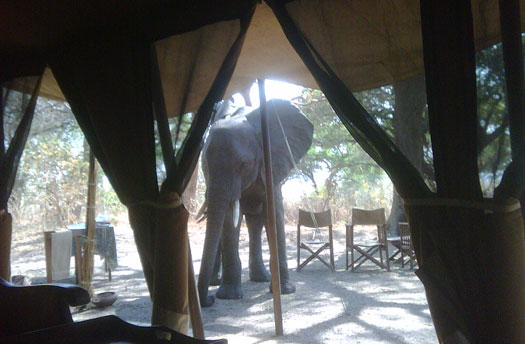 What’s going on with the wildlife in western Tanzania!! There are chimps with major, did I say major, attitude at Greystoke Mahale. Pimu, the current Alpha Male entertained (and somewhat alarmed it must be said) us all last week with wild ‘Jimi Hendrix’ air guitar displays as he rampaged through the kitchen and staff area screaming at the top of his lungs as ‘lesser’ chimps scattered whilst branches rained down on all.

And then Chada Katavi is literally full of elephants, in and around camp, every day, several times a day. It was not at all unusual to be sipping morning tea in the library whilst sharing the space with a very small elephant (known as Charlie Sierra, when guests are around, or Cheeky S**t when they’re not!).

This particular “Week in the West” has kept us thoroughly entertained and on the edge of our seats throughout. I’m with a fab UK photoshoot team, out here visiting all the Nomad camps to get stacks of new images for our website (all-new one going live by the end of the year). Jo and Noemie have never been to Africa, (albeit with a brief stint for Jo from 6-months old)  so it’s all new for them both. I’ve been seeing everything again through their fresh eyes and that’s actually such a privilege. It’s not that I’m jaded, or find ‘safari’ passé as such, it’s only that I think we forget it’s as much about the simple things which can be as astonishing as the mighty.

During the last two weeks (of our three week shoot) we’ve had many of these highlights, not least of all crazed primates and curious elephants. One afternoon we snuck up to one of Mahale’s waterfall with a bottle of chilled wine in a cooler and Kiri – our Mahale manager – as our model. We got her diving into the fabulously clear and deep mountain pools, ice-cold but perfect on a hot day. At Katavi, managers Mark and Kristen joined us for sundowners out on the wide Chada plain. It was one of those unreservedly African evenings with golden sunlight that just makes you feel happy. I know Jo was as she snapped away making encouraging noises; the light was perfect and she made us all look like safari hero’s.

In Sand Rivers, Richard and Matt (our new Kiba Point host) drove us out over wide white sand river beds and got us up close to big herds of elephants minding their own business in the long grass. New managers Mike and Carol were very willing models who didn’t take the job at all seriously but had us all laughing hysterically.

Tomorrow we head off up to the north, Serengeti and Loliondo, to track wildebeest, zebra, lion, hunt with the Maasai, and climb iconic rock kopjes, you name it … we’re going to do it. Richard (Knocker), Nomad uber-guide and our very own Michael Palin, has the word on some exciting stuff, but for more on that you’ll have to wait for our return and the next missive.